The new trailer for Marvel’s LUKE CAGE was just screened at San Diego Comicon, and has found its way onto YouTube.  It looks great and has some genuine OHHELLYES moments!

Check out the video below.

But within the cast list there is another nugget of heart-expanding joy.  The inclusion of a classic Marvel character from the 1970′s Misty Knight! 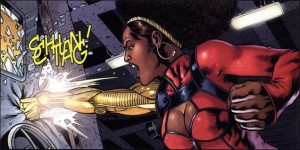 For those not in the know, Ms. Knight is a former NYPD officer injured on the job who goes on to become a bionic private detective. Using technology and kung fu, she gets stuff done.

Really hoping that they incorporate at least some of these elements into the live action version of the character.  Misty is one of my favorites, and deserves her own series on Netflix, IMHO!