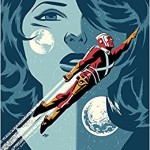 I submitted another quiz to the folks over at The Perfect Bound Podcast and they used it for this week’s Quiz Time segment.  The theme is Amorous Aliens, and looks at comic characters who sought love among the stars.

They made some tweaks and added a bit more background info, but that ain’t a bad thing.

Give it a listen and see what you think!

The quiz is at the end, but the whole podcast is quite fun and informative.

Give it a listen over on their site

On May the Fourth, 2013, as a farewell to dear friends moving far away, I built a fully functional Death Star and stuffed it with delicious candy. I also fabricated a “hard light” saber and blinding helmet (the last, mostly out of duct tape). A good time was had by all, including the camera person […]

Last summer my pop turned 80 years old. The only thing he wanted for his birthday was a Felix Hernandez bobblehead commemorating the Mariners pitcher’s perfect game. Turns out, they don’t sell those things in stores. That lil’ number was only available at the game. A game I hadn’t attended. So after a lot of […]

This is something that I made. And it is one of my favorite things that I have made. Several years ago, I was asked to appear on The Stay Up Late Show to discuss comic books and the upcoming Emerald City Comicon.  I am pretty well-versed on both topics, but I didn’t want to show […]

These are some things that I made. Some time near the end of the 20th Century, I was involved in a production of The Scottish Play (Google it, kids.  Self-education is very rewarding!)  Some how some member of the production had gotten their hands on bags and bags of scrap leather.  Don’t ask me how. […]

This is something that I made. Where I work there is an auction held each December, and the proceeds raised are donated to charities. Each work group collects auction items, and some folks choose a theme to make their offering a bit more enticing. A few years ago, someone in my group suggested a pirate […] 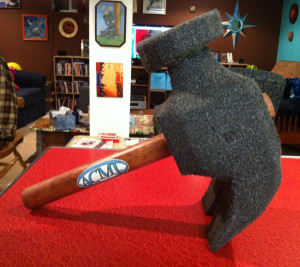 This is something that I made.

Several years ago, Mrs. Me starred in a deconstruction/ vaudeville called “What Have They Done to Baby Jane?”

Spoiler Alert!
At a pivotal point in the show, the maid is beat down on with a hammer.

A few weeks before the show opened, Mrs. Me handed over a yoga block and said, “can you make something that looks like a hammer, but is safe to knock against someone’s noggin?” 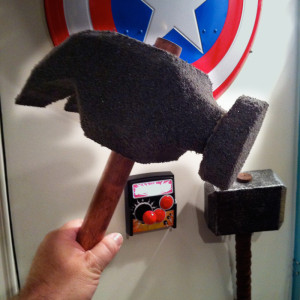 Several hours and one bread knife later, this blunt but harmless object revealed itself.

I quite enjoyed making it, and the scene always got a big laugh.