UPDATE: it has come to my attention that artist Paul Michael has shut down his Facebook page and Etsy shop.  However, you can now find his work at this Marketplace site.

His jewelry has made him Internet Famous!

The first piece I remember seeing online was an engagement ring he was commissioned to make that looks like Jake from Adventure Time.  That. Is. Terrific!

His recent follow-up was a highly detailed depiction of Han Solo, frozen in Carbonite and small enough to fit on your finger. 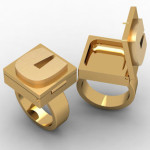 Michael is an imaginative designer, and has many clever designs over on his Facebook page. My favorites are a colorful Captain America inspired band, and a fanciful but spot-on mock-up of Underdog’s Super Energy Pill concealing finger dangler.

The Han Solo ring is now available on Michael’s Etsy site, along with several other Star Wars themed pieces. 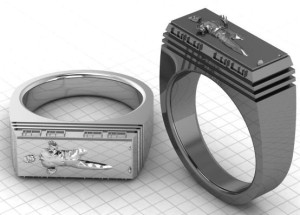 All photos property of Paul Michael